Planning a mountain bike ride is always a bit complicated if we don’t know what the tracks look like, if it’s rideable, if I have to carry the bike, if I’m skilled enough, if it’s exposed. Then I also need to figure out how much time I’m going to spend on the bike.

This process can take weeks, as I search into the wide web for pictures of the area, specially the trails and if other riders have rode there.

I found what was supposed to be a mountain biker dream; the Rawyl pass, somewhere in Switzerland. To reach the pass, I would have had to ride a plateau of sort, with nice lakes, above 2400m high, almost flat, carved for mountain biking.

But first, I had to reach the pass.

This plateau is above the Tzeusier dam and to reach it, I had to ride a steep “road”, called Road de Sel. As this road can be exposed and steep, I wanted to be sure beforehand that I could ride it, up and down.

I found several pictures of mountain bikers who rode this very path. And the pictures looked very promising, as it could be done all on the bike.

But things can change quickly on the bike, as you’ll discover.

Now, let’s start early, around 5 a.m., as I decided to ride before noon, to avoid the summer heat. Riding in the mountains so early is almost a mystic experience as there is no sign of human activity. 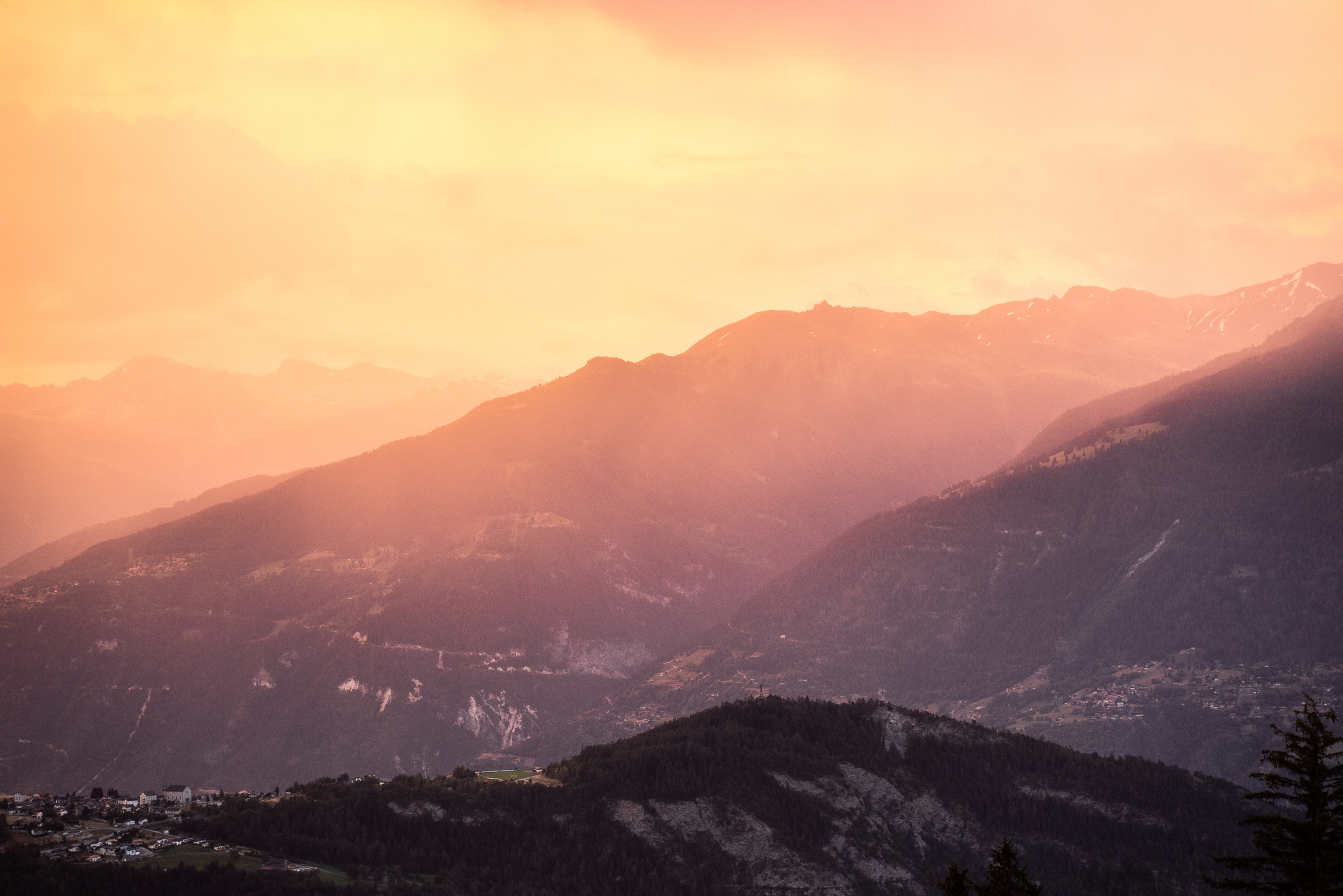 After having enjoyed the sunset over trailing clouds, I rode from Anzere to the Tzeusier dam. It should have been an easy ride.

But during a narrow path, my handlebar hit the rock and I fell down a steep and high wall, around 4m height, with the bike following on top. In these moments, the most dreadful parts are just before falling (oh sh**t) and afterwards; “what’s broken?”.

I went through countless injuries during my life, several time undergo serious surgery and falling from the bike is something that often happens. Not that I’m particularly clumsy, but like to push my limits.

However, I could learn a few things from these crashes, the first being “how to fall”, meaning I roll more than I fall. That leads to bruises all over, but so far, I’ve never broken anything while riding a bike, and certainly no collarbone. The second thing is that I can recognize from the pain if it’s serious or not, if it’s broken, stretched, sore or otherwise. Sort of self diagnosis.

Anyway, after most of the pain subsided and I realized that despite the bruises and hematomas, I was ok, I started to look at the bike. Curiously, there was not even a single trace of damage.

After a crash, I need to let the adrenaline cool down and thus, I pushed the bike a while.

But my confidence was damaged. 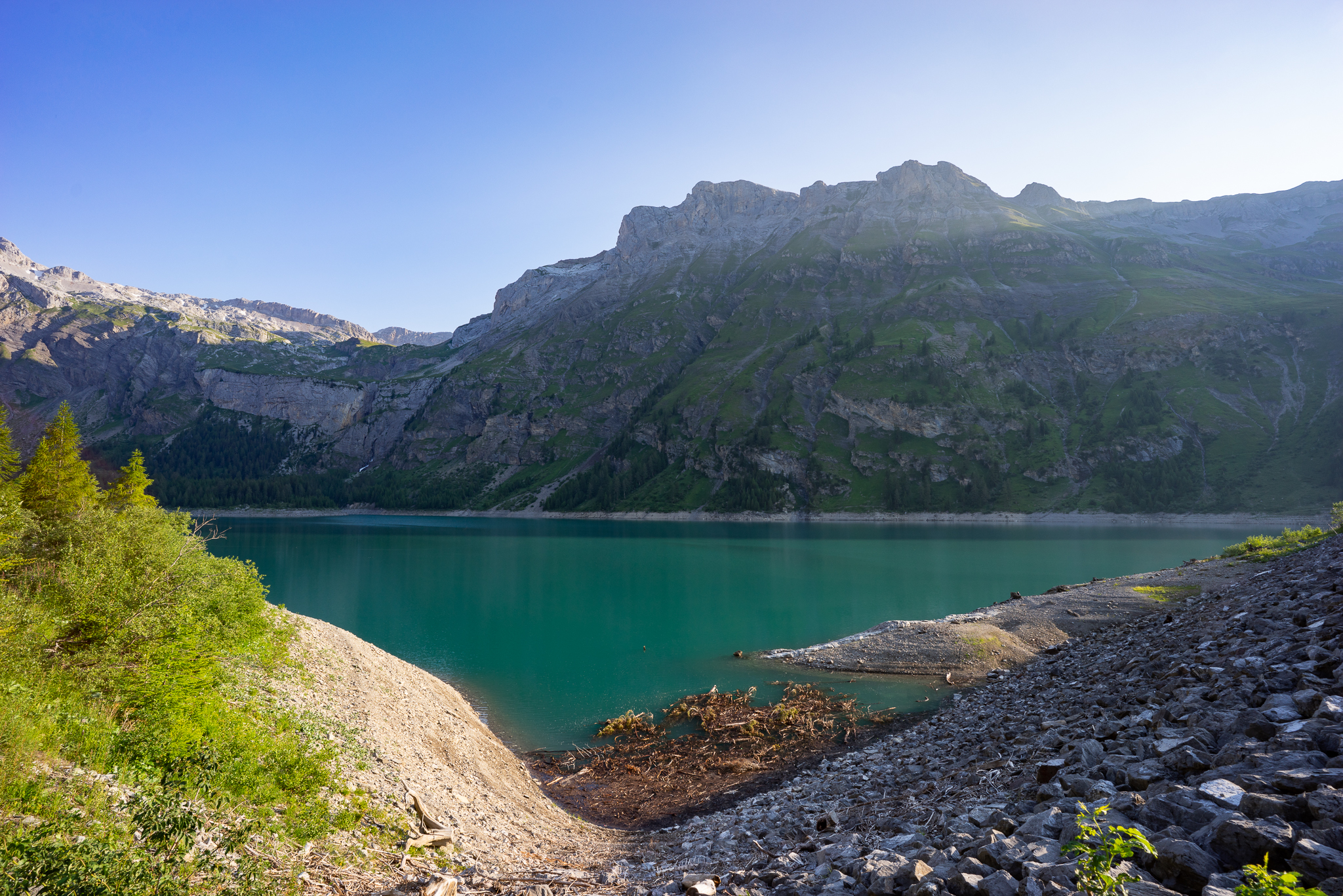 After having enjoyed the sunrise over the dam, I rode to the road de Sel, expecting a nice climb. By then, it was 7a.m.

The moment I started the climb, I met two construction machines slowly driving down the “road”.

My nightmare went on.

Those two construction machines just completely destroyed the otherwise nice road. The steep road was now composed of 20cm of slippy mud plus at least 20cm of stones from the mountain. It was like riding in the aftermath of an avalanche. I suspect the “road” was damage through the winter and they did their best to restore it.

But it was definitely not rideable and barely wakeable. 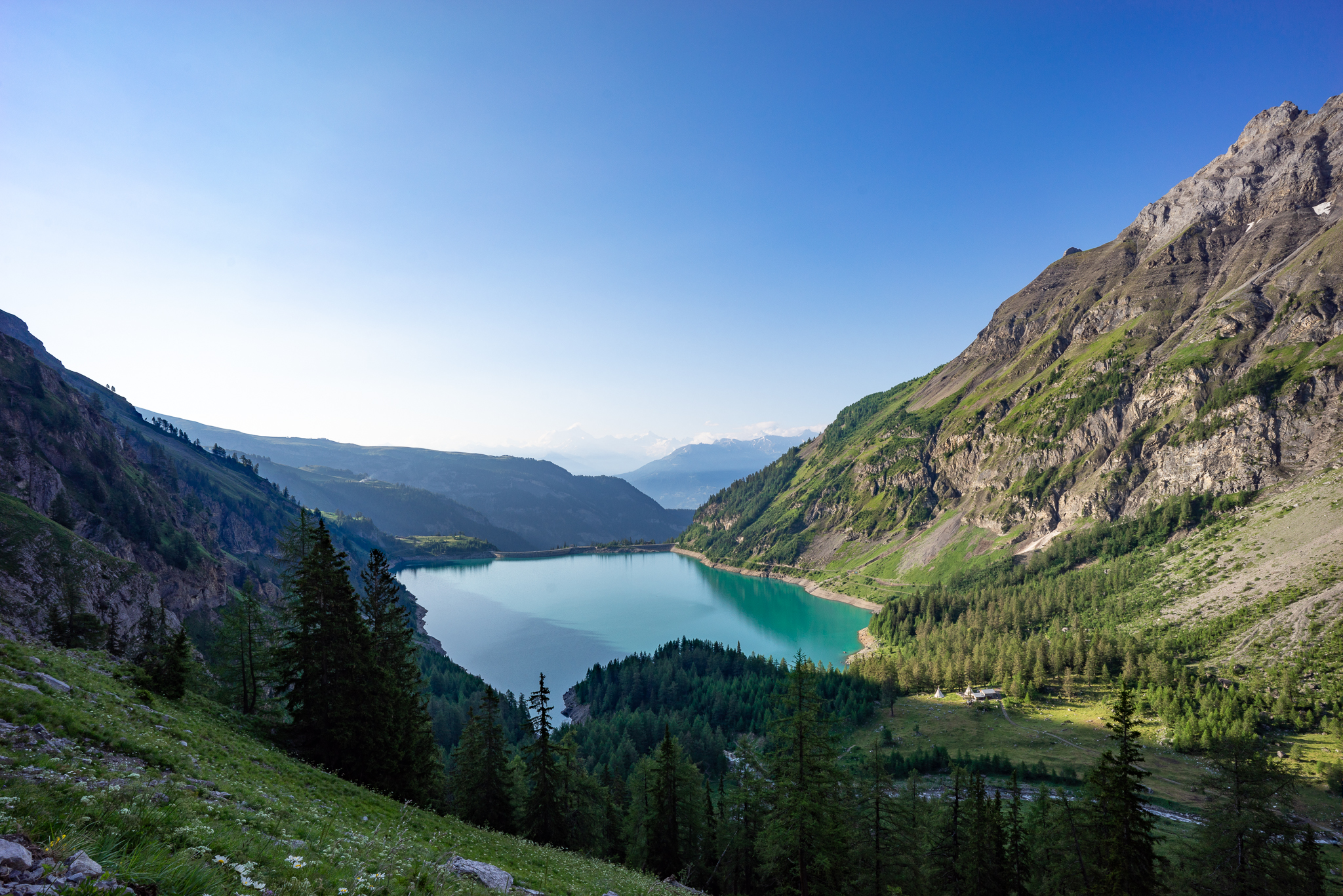 8 a.m. Tzeusier lake from above.

And so I pushed my bike, for about an hour and slowly came to the realization that I would have to push it on the downhill also if I didn’t want to finish 500m lower, as the road was traced on a cliff.

When I finally arrived at the top, a place called Armillon, I knew a had to carry the bike a little more to the plan des Roses and finally enjoy the plateau to the Rawyl pass.

But as I didn’t expect the already 1h bike pushing, not to mention walking during the downhill as well, I realized that it would be too long for my available time schedule.

And some muscles, actually all of them, started to ache badly. From experience, sore muscles lead to another crash. 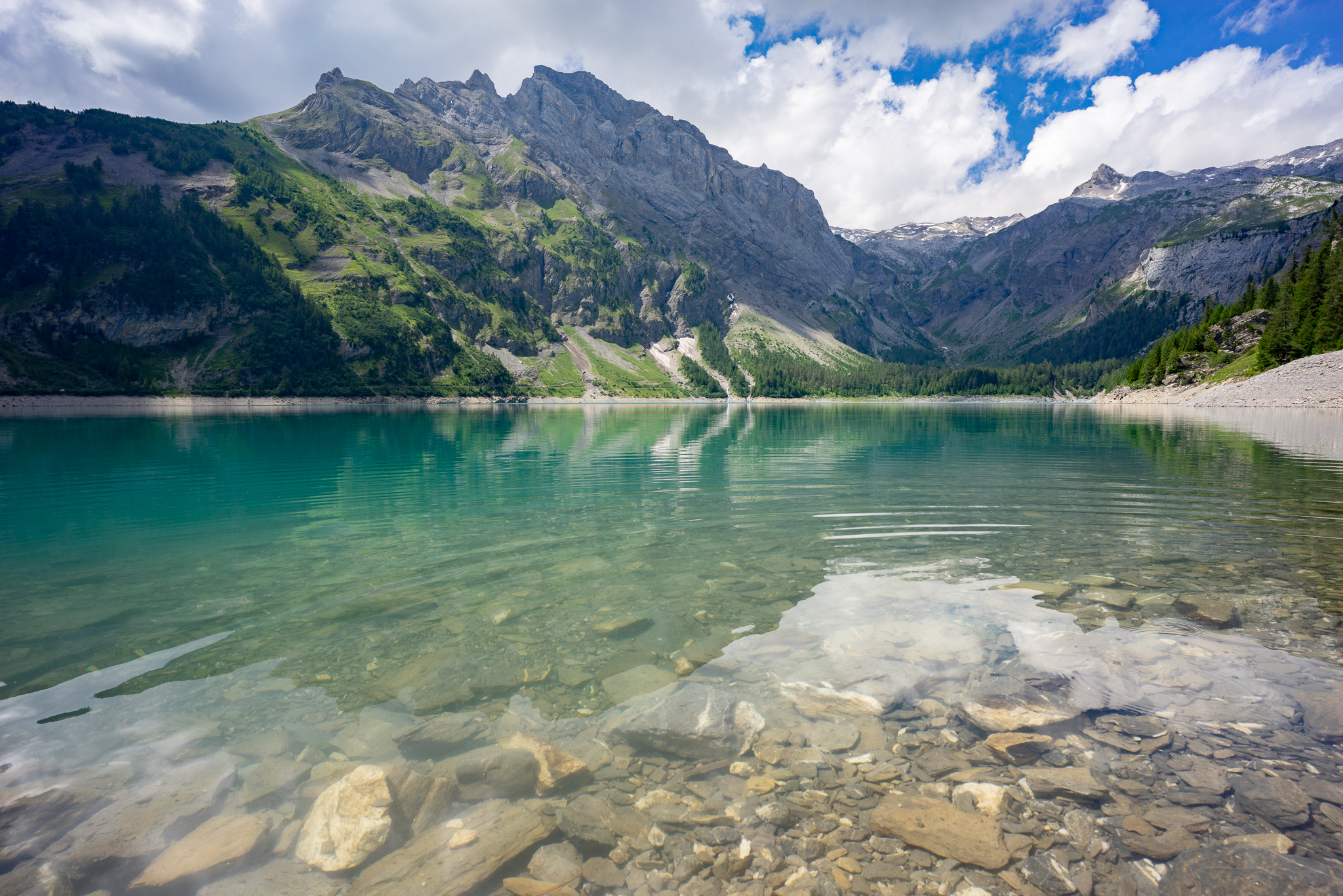 So I reluctantly turned back. At least I enjoyed the view. 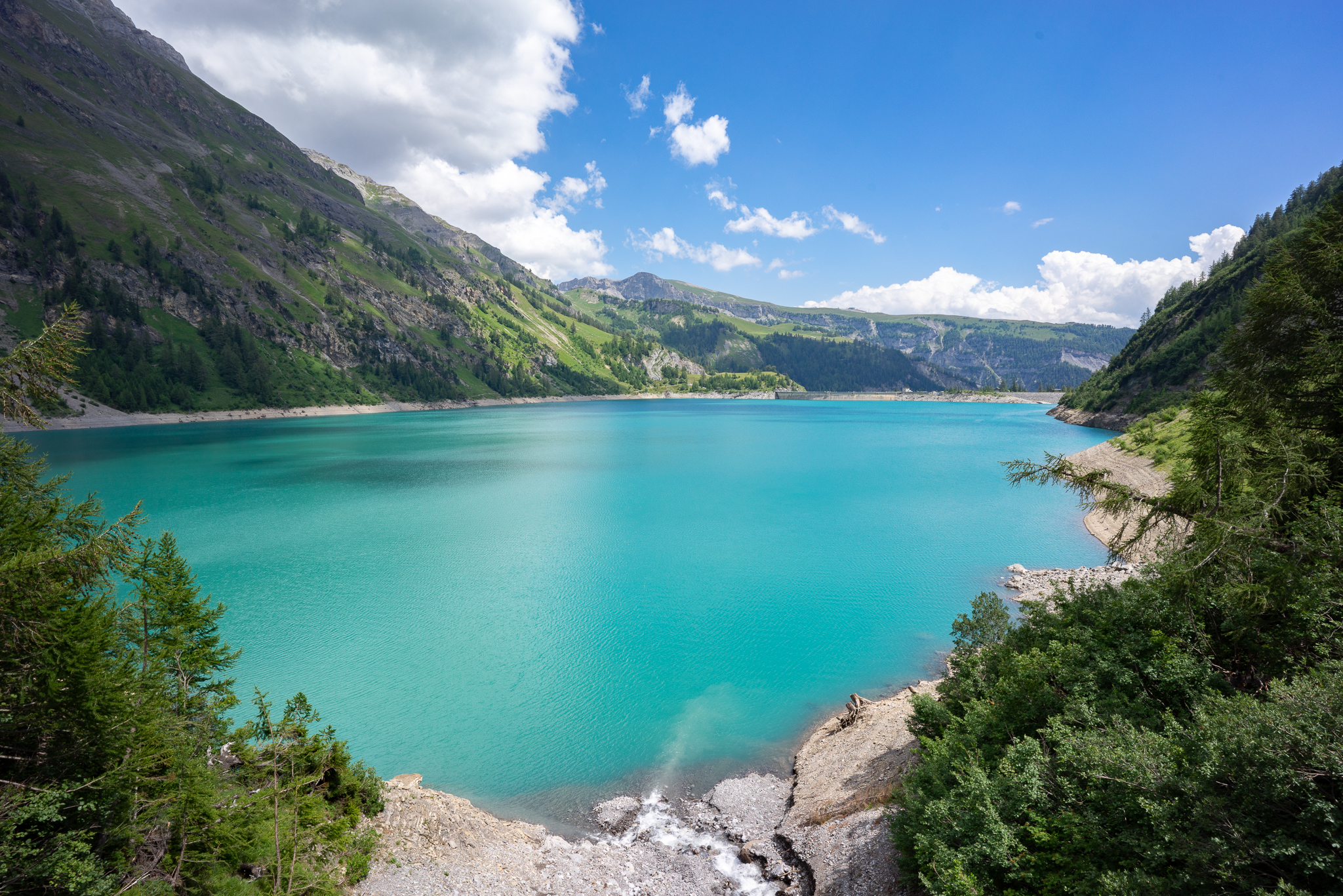